“Last One In” an apocalyptic, deck building, zombie surviving’, card game designed by

As I’m still trying to find my voice in previewing/reviewing games, I defaulted to what I do best. I quality assured it. Part of the job is thinking about the end user, so what do I do? I created profiles to approach the game in different ways.

Meredith: She knows what she wants in a game. If there is a chance to go after the other person, try and score the most points or gather the most resources in order to win, then Meredith will do take that approach. Some may say she has an aggressive nature when it comes to boardgames. Others just say that she’s confident in her goals.

Lauren: Tends to keep herself to herself, plays the long game and if she has the chance to bolster her defences, then that is what she will do. She’ll build that engine to generate resources later on and has a defensive style of playing.

Joanne: I’m actually no, I’m not a planner. I wouldn’t say I’m a planner. I would say I’m a kinda fly by the seat of my pants gal. You know moment to moment, yeah that’s me, that’s…yeah” – Pretty Woman – That’s Joanne, doesn’t really have a gameplan and just reacts to the game situation. Sometimes this approach works, sometimes he doesn’t.

When I was asked to look at ‘Last One In’, I honestly thought, hmm another zombie game? What makes this one different from others on the market?

When it comes to zombie games, I’ve played Zombicide, City of Zombies, Dead of Winter, so while I’m not the most ‘learned’ about the genre, I have played enough games to know whether I enjoy the subject matter.

Luckily, I do enjoy it, so I said ‘Yes’ to reviewing Last One In and eagerly awaited for the game to be delivered. I wasn’t disappointed when it landed on my desk. I opened it and of course, took in the new board game smell (or at least the prototype review version). I appreciated that the components were sleeved and the cards were of good stock and thickness. It felt like a real game ready for release.

First, I looked at the game components, and as stated above, it looked solid and well made, even if there were preview. The writing on the cards is small so people that have sight issues may have problems reading the cards. However, if this is because of the preview/review copy then this may not be a non-issue. 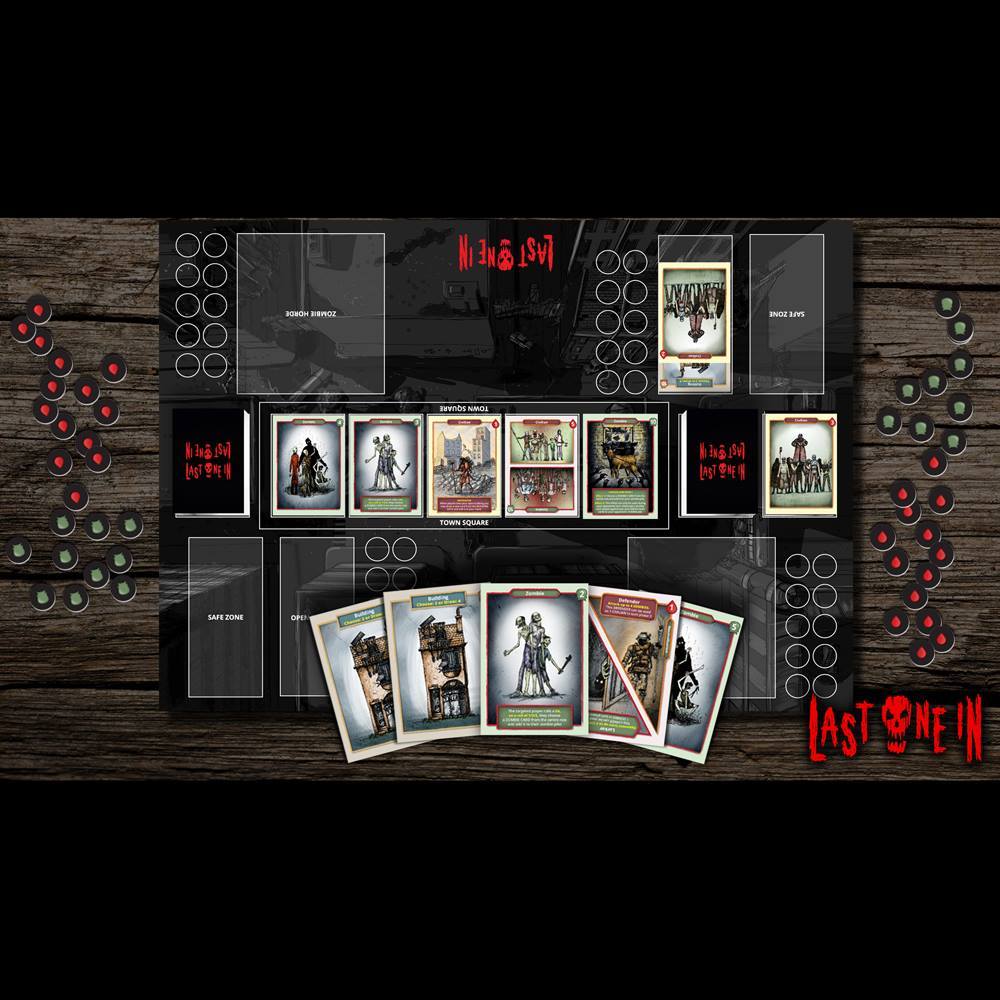 The rules were next up for inspection. The english and flow of the instructions were easy to follow and understand. Of course, there were some ‘What if’ situations that popped up during the initial play throughs, but after playing the game and then analysing what the text was saying, then it made sense. Since I analyse rules/conditions and exceptions for a living. The ruleset didn’t set off my QA alarm. So thumbs up to the rule writers.

The rules at first, did have to be by my side for the first couple of game plays, as it was hard to remember the phases and what the powers of certain cards were. This does disappear with subsequent games and you will find yourself flying through the rounds, doing what needs to be done to survive and win.

Gameplay Last One In

This is where I feel the personas that I’ve created come into force. Long story short is that I did not feel that any particular approach had any shortcomings when compared to one another.

When playing as the Meredith persona, it meant continuously picking up cards and using effects that allowed me to flood my opponents zombie hoard with an onslaught of zombies while not really concentrating on building up my safe houses. There were times when I had to switch to trimming the zombies from my own hoard but the objective here was to force my opponent to not get overrun. If they are using cards to trim their own hoard, it means that they are not really concentrating on me or their own safe houses. Sometimes, this approach worked. If the opponent is not paying attention, then flooding their horde until they reach one hundred (the victory condition) is an effective technique.

Lauren, this persona when used with Last One In, works just as well. The approach Lauren takes is to concentrate on cards that allow the citizens to go to the safehouse. It allows for the trimming of the zombie hoard and swapping safe houses to get the fifty points needed to win via the safe house victory method.

Joanne, this persona is what I’m like, I identify with this style. When it comes to playing games for fun, I rarely know what I’m doing and I always tend to go with the moment. I feel that this is the best approach in Last One In. Playing this way allows me to consider all of the permutations that occur during the game. Yes, sometimes it does allow for sub-optimal playing where neither attacking your opponent with zombies or bolstering your safe houses with survivors is prioritised but it does allow for changing strategy depending on what cards are available to obtain from the ‘Town Square’. I found myself liking this approach especially when it came to playing with more than two players.

Overall, I’m used to playing deckbuilders, but Last One In felt different from the other types that I’ve played (Star Realms, Marvel Legendary). I didn’t get the feeling of trimming down my deck, however that is because most of the time, I was utilising a ‘gut feel’ approach. When I was using the other personas, it was easy to concentrate my six hand limit to cards that helped me be defensive or offensive in nature.

That is the good thing when you play ‘Last One In’. You can utilise different approaches and it still is fun to play. You still feel like you have agency even if you are knee deep in zombies and you still have a safe house to fill.

Even selecting the type of safe house is a choice you have to make. Do you go for the one hit (fifty pointer) and it takes a while to fill up or do you fill smaller houses and slowly build up your survivors (once the house is full, then it’s no longer a target).

Another plus for this game is that you can play 2 against one or in a 2 vs 2 team play. The main difference between a 2 player and the team variant is that it’s easier to zone in on a particular aspect of the gameplay. I found that although the games were faster pace, it was easier to keep track of zombies vs survivors. Compare to a two player game where you have to be aware of your state of play and your opponents, it is easier to let things slip.

For transparency, I didn’t play the team variant as much as two player (Out of 15-ish games, 4 were team based).

The different modes inject a new element to the game and prevent it from feeling stale and through explore the game via the personas, it is a game where different approaches are no better or worse.

For future productions of this game, a nice reference card would be handy outlining the phases/powers would be a nice touch.

In conclusion, I would recommend this game if you want to pick up a fun, light/medium game (I would compare it to Star Realms in how it feels to play).