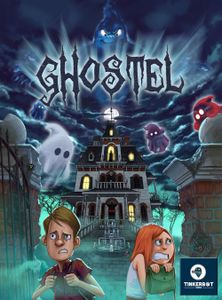 A lot has happened since Christmas, a whole new adventure with a new job and relocating to Wales. So, to be honest, playing board games has had to be put on the back burner. Now, that I’m settled, I made a trip to my local game shop in the centre of town (Rules of Play) and brought a copy of Ghostel.

Ghostel is a dice rolling worker placement game for 2-4 players that plays in roughly 45-60 minutes. You play as ghosts scaring visitors away from a hotel that used to be YOUR haunted house!

The creators of this dice rolling game is Gino Brancazio from Tinkerbot Games and Bevan Clatworthy.

I remember seeing this at last years (2016) UK Games Expo and wanted to pick up a copy but alas, there were no copies available.

As I said, this game reminds me of the old PC game called ‘Ghost Master’ where you were tasked as a master of ghosts where you were tasked with scaring people away from the house that you were haunting. I liked playing that game back in the day so based on those memories, I approached Ghostel with high hopes and expectations.

This review is going to be slightly different, as my son was tasked with playing the game and then sharing his thoughts about it. To make it easier, I prepared some questions which he duly answered.

During the night phase, three dice are rolled and this represents the “scariness” ghost. The player then chooses which room to start their haunting. So, if the player rolls a 2 but the guest has a scare rating of 4, then the ghost has not succeeded in scaring the guest from the hotel. In order to scare the guest from the hotel, the dice placed within that room has to equal or exceed the scare rating of the guest. The process of placing the ghost in the rooms is repeated until all the dice has been placed by all the players. 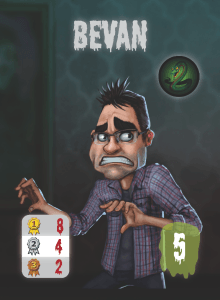 By the use of phobia cards, as long as the guest has the same phobia that is present on your scare tactic card, then that dice result is doubled. In the case of the example above, if ‘Joe’ the guest had a phobia of spiders and you had the right card to place, then the die result of 2 would be doubled to 4 and thus Joe would be scared from the hotel. It should also be noted that other ghosts can aid in scaring off the guests.

When that happens, the ghost that had the higher dice result gets the points for first place, second highest contributor gets second place score and so on.

Once, the ghosts moved and placed the dice, then the night phase ends and the day phase begins. During this phase, the ghosts are removed from the board, the scoring is tallied and the players have the opportunity to buy cards that will help them in their quest to scare guests more effectively.

The Day/Night phase is repeated until the house can no longer be fully populated by the start of the night phase.

Does it tell a story such as Robinson Crusoe, does it have tension like Pandemic or Ghost Stories, is it pushing the boundaries of taste such as Cards of Humanity. No, it doesn’t but what it does do is to be a game that is good for a family/people to bring out and have good wholesome fun. I can imagine bringing this out at a BBQ when everyone is relaxing, I can imagine intorducing this at a board game lunch with work colleagues whose exposure to rolling dice is Monolopy or Game of Life. So for me, Ghostel is one for the collection.