I’ve always loved card games, whether it’s playing snap with my two children, or when I was younger, playing a variant of Blackjack in my sixth form break room. So when I was offered the chance to have a look at Magmeda Monsters , I said Yes, I would love to.

What is Magmeda Monsters about?

It’s a two player card game that has been designed by André Forsblom by Rapid Leaf Productions. The premise of the game is that there are two factions, the Light and the Dark and as old as the universe, it is a battle between Light and Dark and who will come out victorious. In this case, the light is represented by the Liberation Deck and the dark forces of the Magmeda Universe is represented by the Oppression Deck (boo hiss).

The first aspect of this game is that you get a nice compact box with the game, it houses the two decks, the rule book and tokens/markers that aid the game (although they are not needed).

Each deck consists of 18 Monster cards and 21 Skill cards.

The game is played best of 3 rounds. In each round the players draw 6 Monster cards and 6 Skill cards. Knock out all your opponent’s monsters to win a round by using your monsters’ magic and abilities wisely, along with your powerful spells and artifacts!

Artwork of the Game

The first thing you notice about Magmeda Monsters is the artwork, it’s quirky and gives the cards it’s own charm. It doesn’t try to emulate the artwork of Magic, Pokemon or even the newest Final Fantasy (with it’s inconsistent artwork). It knows what it is and stamps its own identity. These are the monsters and these are what it looks like. 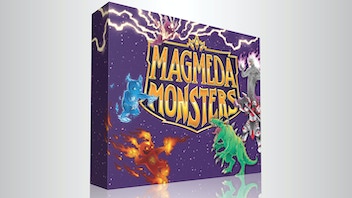 Learning to play was pretty straightforward, I have to admit that I do have to re-read rules and make sure that I understand the game in an effort to teach the rest of the family, I didn’t have any problems with Magdema Monsters, the rule book had enough examples and flowed in a way that was easy to read and more important understand. Now, as someone who advocates for the customer experience in his day job (Quality Assurance), I’m pretty unforgiving if a manual or rule book causes me headaches. I’m pleased to say that Andre has provided a good straight forward guide to aid the players.

In addition, the game comes with markers that aid the users in playing the game, if you have trouble knowing what pile is which (skill vs monster cards), there are tokens that you can place on the table to help you. It’s these little touches that make you go, “Nicely done”

So how do you play Magmeda Monsters?

Each person takes a deck, either the Liberation Deck or the Oppression Deck.

They then split their respective decks into two (skills and monsters), give it a good ol’ shuffle and then place it in front of them. If they want to use the skill/monster token to help them remember, then they can.

The card is then turned over and the one with the highest energy stat wins and becomes the first player. Apart from the initial first player turn (first player turn cannot use skill cards), the players use the monsters and skill cards to buff their monster in various stats so that they can knock out the opponents monster.

To aid in the battlefield and on certain turns (as noted on the turn cards), the player can utilise backup monsters, these cards are not part of the active attacking playing field but can aid the main monster with their magical abilities.

So, with the buffed up stats, the skill cards that alter the playing field, the main objective of the game is to knock out the opponents monsters, once the subsequent monsters have been knocked out from the deck, then the game is over and the round starts again. Best of 3 wins!!

I liked to play the Oppression deck, and in particular using the skill cards to modify my opponents stats to make for easier domination of the battlefield. Most of their cards halve the hit points of the opponent or increase your own stats to prevent easy knockouts. If played well, the player who has the Oppression deck can keep the opposing monsters under control. A particular card I like is the Flame Mask where you can increase the attack by 20 for each flame monster in each players discard pile. If attached to a hard hitting monster such as Krytodox ( 125 attack), then that creature could become quite powerful. Combined with some good backup cards, the game gets interesting, very quickly.

When you play with the Liberation deck, you find (well, I did), that it is focused around the defense or negation of the aggressive Oppression deck. It’s a nice touch that fits the theme of what each faction represents.

So it all comes down to your play style, do you want to go all out and try and knockout the monsters hard and quickly, or do you want to take the more thoughtful route and defend against the attacks in a manner that reminds me of Aikido. Use the anger of the ‘Oppression’ faction against them.

Do I like Magmeda Monsters, – I believe I do

Is this a game that I can come back to again – Again, yes. If you compare it to other games like Fluxx, then it is more structured and you have tons of replay even if it is only two factions. If I had to compare this to a game that I would play often, then I would say Star Realms. Not in the way it plays, but in the manner of getting it off the shelf and having one more go.

I’ve introduced this game to my colleagues at work who are not your hard core gamers, and yet they appreciate what this game brings to the table. They liked that the rules were straight forward, they liked the theme of two factions at war. (To be honest, we are geeky in that respect).

The game does make you think about what artifacts you want to attach to a creature, what creature you want to use as a backup or even when to attack and whom?

I would say that the only negative I had about this game is that at first, you do need the pen and paper to keep track of the monster stats and hit points, which makes me think of the administration nightmare that is Sentinels of the Multiverse. However, this does not suffer from that accounting nightmare. The feeling only lasts for a couple of games until you get used to figuring out the various buffs/debuffs of the monsters. I believe that this is the one thing that prevents it from escaping the good category into the OMG, this is Great. It prevents it from being truly portable.

But, don’t let that one thing prevent you from getting this game. It is good fun and people of all ages will enjoy Magmeda Monsters. I play regularly with my 8 year old son and it helps him with his mental arithmetic and forward planning. That, and he likes beating his dad on occasion.

This is a well thought out game with rich lore and monsters/skills. I look forward to seeing more factions arrive within the Magmeda Universe.