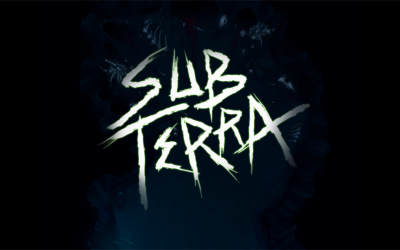 I don’t have many fears or phobias, I’m not claustrophobic but the idea of going spelunking or in layman’s terms, exploring caves is not my idea of fun. The thought of getting trapped underground with no easy way out or getting stuck in a tight crevice – Yeah, no thanks. (Which is weird because I can be shut in a closet or tight space without any problems.)

As I’m not going to be venturing underground any time soon, the next best thing is to talk about Sub Terra, a new game that is soon to debut on Kickstarter from In The Box Board Games. This is a game for 1-6 players and plays between 45-60 minutes. It is going live on Kickstarter on the 10th January 2017.

The description of the game is as follows:

A tense and terrifying cooperative game of subterranean escape for 1-6 players, can you survive Sub Terra?

Sub Terra is a 1-6 player fully cooperative, exploration, innovative action management game of subterranean cave escape which will get your heart pumping as you resist the Earth’s will to eliminate you one by one. Players will progressively explore the cave network in the hope of finding the exit, while struggling against the horrors of the claustrophobic environment around them, from floods to cave-ins, to darker things…

Can you survive Sub Terra?

When I first heard of this game, I thought that it sounded like a mixture of Adam Kałuża’s ‘The Cave’, a tile laying game where you play as cavers exploring and the 2005 horror film, ‘The Descent’. Now, that I’ve played the game, my initial impression was well founded.

In the game, there are roles that players can use to explore the caves. Each role has unique active and passive abilities. As the gameplay progresses, you can see that the abilities are well thought out to showcase different elements of the game. For example, the Diver can use the flooded caves to shortcut through the caves. The other players must use actions to swim through therefore slowing them down. The Bodyguard can protect the others from hazards and eliminate the horror that chases them through the cave system. The Scout can hide and the Medic can heal others at a reduced cost. As you play, you find out that the players mesh with each other, other people’s weaknesses become your strengths. It is only as a team that you will be able to escape the caves alive. 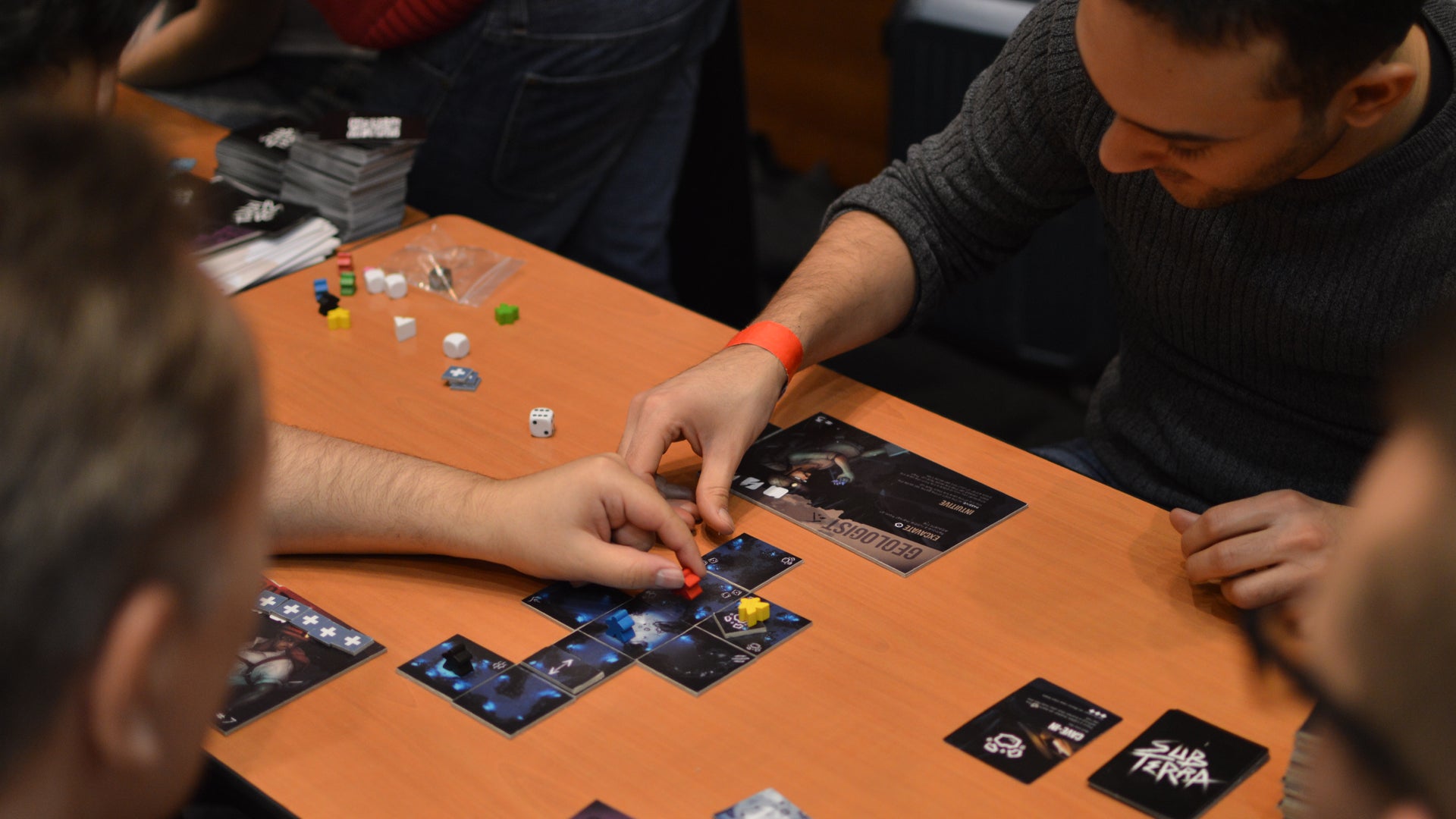 It should be noted that the characters represented are diverse and background which is a breath of fresh air in the gaming industry. The Leader in Sub Terra is a Muslim woman. Whilst unusual in a board game, in real life there have been many noteworthy women who have held leadership positions such as Ameenah Fakhim (President of Mauritius), Tansu Ciller (Ex Prime Minister of Turkey).

Jai the bodyguard is from the Indian Sub-Continent, Zoe is an engineer, Ishiko is a Japanese Climber. While it didn’t sway my choices within the game, it was nice to have characters that were not the stereotypical bimbo, the loud mouth thug/street wise dude, the sassy black woman or the big burly leader that imposes their ideals upon the others.

There are several components in the box, namely the tiles that make up the cave system, the hazard tiles that cause the cave environment to turn against the cavers, the player boards and the various chits that represent the ropes and horrors.

Before I go into the breakdown of the game, what is the objective – Basically, it is simple – Explore the caves and try and find the exit before you succumb to the horrors that lurk within the caves.

The game is broken up into rounds, where each player has up to two actions to move around and explore. The player can reveal a tile and move, heal, they can run, and/or use their passive/active powers that are unique to them.

Once everyone has taken their two actions (or three if they have exerted themselves), the game moves onto the next stage where the horror moves to the closest caver (if applicable), then a hazard card is revealed and resolved. It is during this stage, that the cavers hope that the choices they’ve made will not come back to bite them in the proverbial rear.

Standing in a room filled with gas, well you’ve just lost two health points, resolved a flood card and it’s successful? Then the cave has been flooded and the routes have been cut off, same with cave ins. Very rarely will these cards benefit the players, this game is truly a risk vs reward. You push your luck and hope that you’ve been paying attention to the cards that have been drawn.

You might think that it would be easy to explore at a leisurely pace, but nope, not in this game. Every round brings the players closer to the end of the game. The Hazard cards represent a timer, the batteries in the torch are dying and you must find the exit before the darkness swallows you whole.

Throughout the many playthroughs of Sub Terra, it became very clear that just reveal and then move would result in time running out before the cave exit was found. The players in the game should be daring, embrace the risks but at the same time, they should respect the environment that they find themselves in. There are times when you should tread lightly so that you don’t finish a turn in a gas/water room.

While it is good to split up in the beginning, players should keep in mind that they should stick together if they truly want the whole group to escape into the light. In the first couple of playthroughs, a player spent most of the game knocked out and the rest of the crew tried to find our way to him to revive him so that he could escape. Ironically, he managed to escape through the flooded caves while his rescuers fell to the darkness.

What we found best was to split up at first so that the cave network can be revealed as the cave tiles are laid down. If you don’t, then the cave exit (which is in the last 6-10 tiles at the bottom of the pile) will not be revealed before the time runs out. While exploring, it is here that the beauty of the different character powers come into effect, the climber can lay down ropes to aid the others, the bodyguard can protect against the horrors and hazards, the leader can use the other characters as her own which is handy if she is near the exit and the others are close by.

As much as I hate to say it, there are times when it’s best to cut your losses and run. If another player is cut off and everyone else is near the exit, it doesn’t make sense to try and rescue them if it’ll put the others in danger. I guess that’s the real-life choices that people make in these situations – The good of the many outweigh the needs of the few.

Sub Terra is a very thematic game. Yes, I was only putting tiles down on a table but each placing of the tile makes you feel worried that you’re going to reveal a part of the cave that just wants to screw you over. This cave system is not a friendly place to be, the horrors chase you, and depending on the difficulty level, the hazards just make things go from bad to worse. I did like the touch that the final card doesn’t kill you outright, if you are lucky and I mean very lucky, you can make it to the exit (if revealed), if and I mean a big IF, you make successful rolls each turn. If you don’t, then your torch runs out and the darkness swallows you.

How does this game play with newbies? I’m glad you asked, one of the first playthroughs was a 5-player game with people that are very new to modern board games. The only stumbling block at first was remembering the various action/points but once a few rounds was played, then the rules were set aside and we played several run throughs of the game. So, therefore it is very newbie friendly and the action/round setup of the game makes it very easy to remember what to do.

The only criticism of this game is that when a player is knocked out via the environment or the horrors, if the players are split up then a player could be shut out of the game for a long while until they get rescued. However, it is not a “showstopper” and proper planning can limit this.

In my games, several players said that the environment was more frightening then the horror that was chasing us around the caves (It does help to have the bodyguard to fend it off). Several more playthroughs might reveal this to be just a group feeling or whether it’s a criticism of the game.

Gameplay video will be up soon – Sub to my channel to be notified of when it’ll be up.