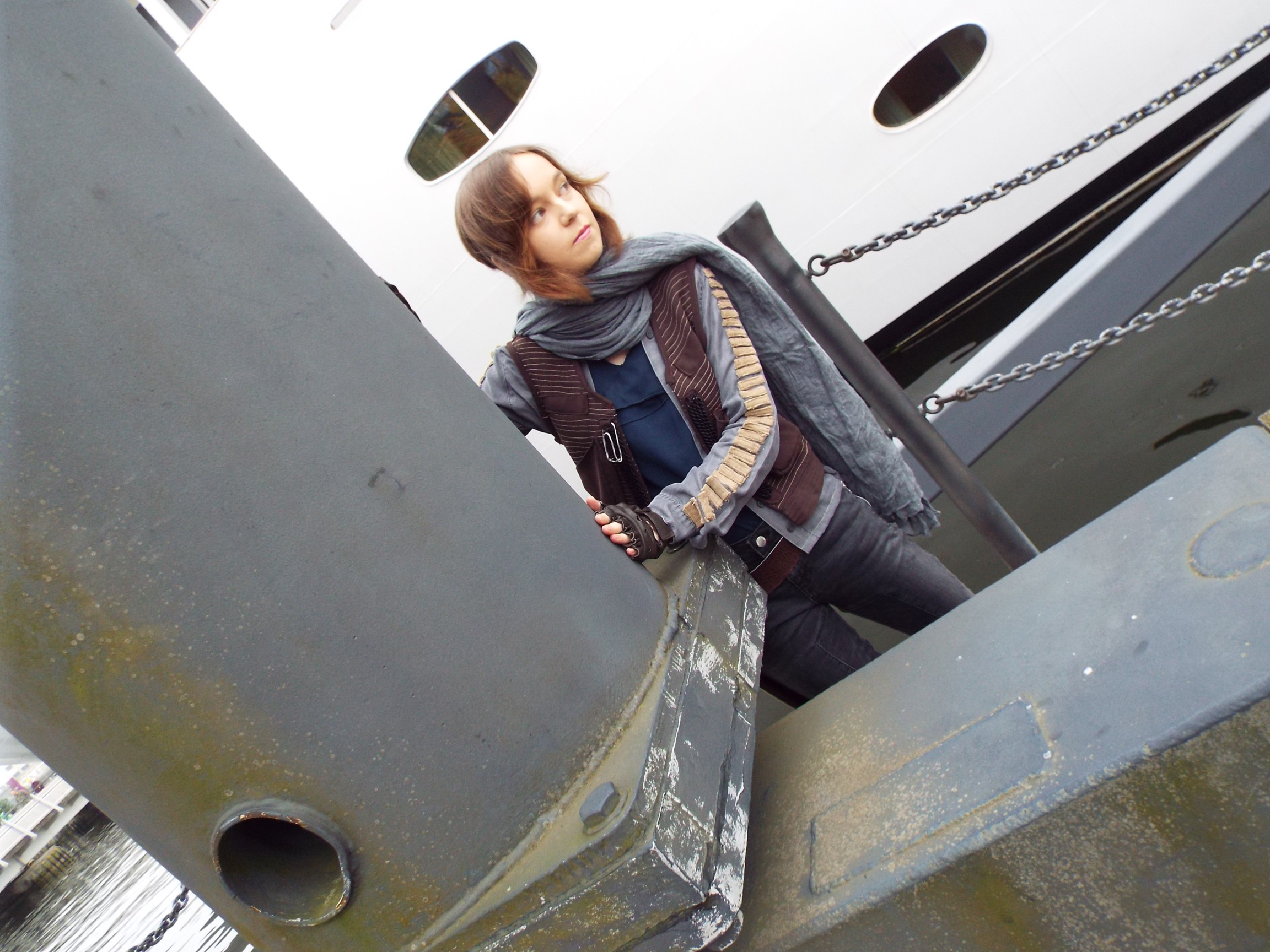 Ever since I went to the Gloucester Comic Con earlier this year, my interest in Cosplay and the people that partake within the community has increased. Day after day, I am amazed at the skill and dedication that Cosplayers exhibit when they don the costume and become the character. To me, it’s another form of acting, theatre and showmanship. The awe that children (and adults, let’s be honest) show when they see the Flash or Sephiroth is good to see.

The community on Twitter and Facebook is big when it comes to Cosplay and one of the cosplayers that I follow on Twitter is Becky aka @SpaceCabbage. I thought I would approach her with some questions and here are the results.

Hi Becky, first things first – how long have you been cosplaying?
Quite a while now actually. I started about six years ago at my first London MCM Expo.

How did you get the passion for Cosplay?
I knew about cosplay from seeing it a little online, but I first got into it after my very first convention where I saw all of these people in amazing costumes brought together in such a fun and creative way to share their love for their favourite fandoms and characters, and I thought ‘I so want to be a part of that’. A friend at university who cosplayed helped me to research and find supplies for my first cosplay.

What does cosplay mean to you?
It’s a wonderful way to celebrate my favourite characters and fandoms, but also just a fun and great experience that I share with my friends and the new people I meet through it. I’m especially grateful for the really close friends I’ve made through it.

Your first cosplay – Who were you and how do you think you have grown since then?
My first cosplay was Trucy Wright from the Ace Attorney series. I’d bought the costume online but made her wand myself. Looking back on it, I liked it but it wasn’t a great cosplay and since then I’ve started making my own (with a lot of help) and I think my skills in both sewing and makeup have grown considerably. I’m still no expert, but there’s definitely been significant progress.

Who are your favourite characters to Cosplay – Can you describe them?
Hmm, that’s tough mainly because there’s so many. I love cosplaying strong female characters like Rey and Jyn Erso from Star Wars. I’m so happy to get more female characters like them in largely male dominated genres. On the other hand, I also love my Chuck Hansen and Raleigh Becket (Pacific Rim) as well as General Hux (Star Wars) cosplays because I get to pull some pretty cocky and show-offy poses.

Ultimate character that you would love to cosplay?
Oh, there’s so many but my definite dream cosplays that I would love to do are Commander Shepherd from Mass Effect, Arika Yumemiya’s Blue Sky Sapphire robe from My Otome and Padme Amidala’s lake dress from Attack of the Clones. I doubt these will ever happen though because they’re way out of my skill set at present, but a girl can dream.

From concept to completion, how long does it take to complete an outfit?
That depends on the cosplay, and how detailed or how much work needs to go into it to be honest. I’ve thrown a simple dress (Flame Princess from Adventure Time) together in a week and made a complete outfit from scratch (Rey and Jyn) which took just over a month. The more ambitious your cosplay is, the more time (and money!) you will require. Planning and leaving yourself more time than you need in preparation for a convention is vital.

Challenging Build?
Probably my latest cosplay, Jyn Erso from the upcoming Rogue One because the entire outfit (top, shirt, vest jacket and leather belt) were made entirely from scratch and it incorporated a few tricky techniques like quilting. Not to mention there were a few battles with a now deceased sewing machine along the way. I also had a mishap with my Raleigh Becket cosplay where I had to completely re-paint a rather intricate design on the back of the leather jacket because I hadn’t prepared it properly first. Sometimes you just learn things the hard way…

What’s the best part about Cosplaying?
For me, it’s all about having fun with my friends at conventions. I’ve always been a bit camera shy, but in cosplay I really enjoy taking part in photo shoots and showing off the hard work that went into it. It can be pretty confidence boosting, but can be a bit weird looking at them and thinking, oh hey that’s me dressed up all cool. And I really love meeting new people and making new friends through it at conventions or online and having them to geek out over my favourite characters and fandoms with.

What’s the worst part about Cosplaying?
Probably all of the time and money that goes into it. I love cosplaying so much, but boy is it expensive, and that’s not even taking the conventions themselves into consideration on top of it! But what hobby doesn’t eat into your bank account? Again, depending on how intricate the cosplay is, it can take an awful lot of effort and time, not only to make the cosplay itself but also to style the wig and apply makeup. But it’s definitely worth it in the end.

Is there anyone in the cosplay ‘industry’ that you aspire to/get inspiration from?
Not really? There’s plenty of cosplayers on Instagram who I absolutely adore, and their work blows me away. I could give a really long list of cosplayers from Instagram and there’s an endless amount of amazing ones featured in various cosplay videos on Youtube. But when it comes to inspiration for my own work, that all comes from the source material and characters themselves. That being said, I do get some great tips and advice from people too.

I have to admit that going up to people in cosplay can be quite intimidating for some people. What’s the best way to approach a Cosplayer?
I don’t think I’m the best person to offer advice in that respect since I’m incredibly shy around new people, but at the end of the day they’re just people like anyone else, they just happen to be in different clothes. It’s no different than trying to approach anyone else. Sometimes you just have to go for it.

Do you have any other talents that you like to showcase?
I’m a writer. I’ve been on a bit of a hiatus at the moment, but I’ve written a fair amount of original works and quite a bit of fanfiction (another great way in which fans have expressed their love of the source materials because they just don’t want it to end). I even had a small following on AO3 which still amazes me today that not only have people read my work, but they liked it too! Enough to ask for more even!

What do you have to say about people that comment that you shouldn’t cosplay characters that are not your build, race, etc?
The whole point of cosplay is to have fun and enjoy yourself. It’s about expressing your love for a character and fandom regardless of who you are. You don’t have to be the same build, race or gender to relate to a particular character either. As long as it’s not inappropriate or offensive then anyone should be allowed to cosplay who or what they want. No one is ever going to look 100% like the real thing, but so what? And well, the majority of characters in different media are not nearly as diverse as the people who cosplay them, so of course not everyone is going to fit into that character’s template exactly. Just let people enjoy the things that they enjoy.

I’ve heard about the term Cosplay does not imply Consent. For people that have not heard of this phrase, what does that mean to you?
It honestly baffles me how people get into the mind-set that cosplay and convention spaces suddenly means that all social norms and behaviours suddenly go out the window. That it’s suddenly okay to take someone’s photo, or touch them inappropriately or harass them when they wouldn’t in normal circumstances. Cosplayers are perfectly happy to have their photo taken, answer questions or chat in general, provided that they’re not busy or taking a break, if people would just ask. If someone says no then you’re just going to have to accept that. That extends to questions and conversation topics too. I’ve been appalled at some of the inappropriate questions that cosplayers – particularly female ones – have been asked that usually focus on their bodies.

I’ve had someone try to take my photo without my permission when I was sat down and taking a break with my friends. I’m perfectly happy to have a photo of my cosplay taken – it can be very flattering and I take it as a compliment – but ask my permission first! Cosplayers are people, and we’re here to enjoy ourselves. Treat them with respect and decency as you would anyone else.

Lastly, do you have any other conventions or expos that you are attending soon, how can people contact you?
I always try to attend London MCM Expo and Alcon every year, but I’ve been wanting to branch out and attend other conventions in the UK. I’ve heard of a few like Amecon and Kitacon which I would love to try. I’ll definitely be at the next London MCM in May, but there’s a chance I’ll be at London Anime Con and London Super Comic Con before that too. It’s my dream to attend one of the big cons in America like San Diego Comic Con, Dragon Con or Katsucon. Honestly, I just want to go to every convention! If anyone has any suggestions for other UK cons, I am open to them too.

I hope that you’ve enjoyed this interview – If you want to be showcased and interviewed, then please get in contact with me via the contact form, or hit me up on twitter (@theangelofdice) or on YouTube (click on the banner on the right). I plan to move the interviews over to YouTube in a more radio/podcast style so if you want to answer the above questions via audio or video, then please let me know.