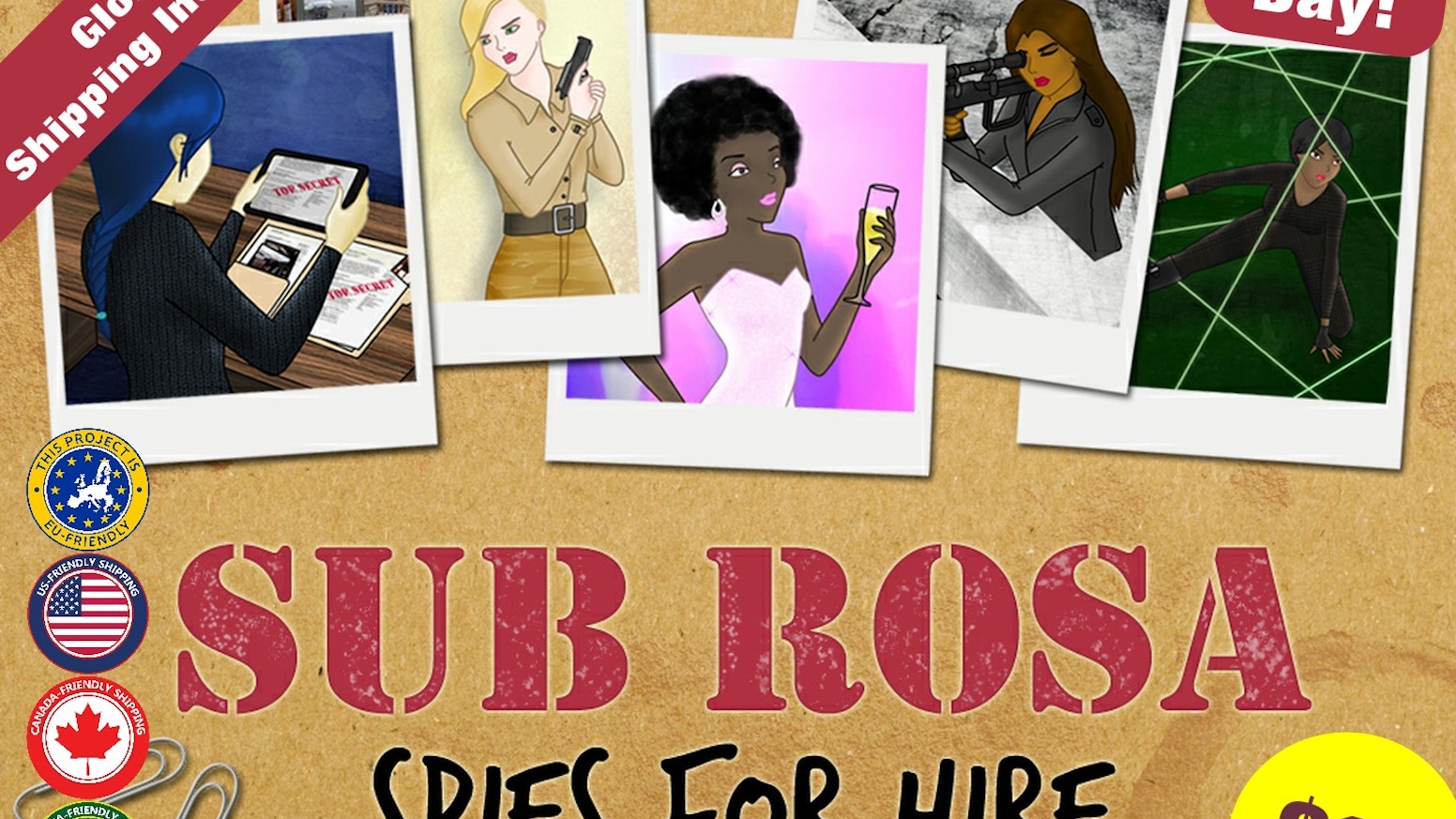 Sub Rosa means “under the rose”, and is used in English to denote secrecy or confidentiality. The rose as a symbol of secrecy has an ancient history.

I had the chance to get a preview copy of Sub Rosa: Spies For Hire from Robin David. Sub Rosa is a bidding and bluffing micro game for 2-4 players where the objective is to bid for agents, and at the end of the game be the spymaster who has the most agents.

It’s Robin’s first game on Kickstarter and the goal is to raise €1,400.

“I’m not saying I invented the turtleneck, but I was the first person to realise its potential as a tactical garment. The tactical turtleneck! The… tactleneck.” – Archer

Sub Rosa is designed to be a game that is easy to carry and doesn’t have too many components. So what does Sub Rosa contain? The standard game comes with 5 ‘Agent’ cards and 28 tokens that are used to bid on the agents.

As the stretch goals get unlocked, more agents will get added to the game.

“I know who I am. I remember everything.” – Jason Bourne

The gameplay for Sub Rosa is very simple, each player receives bidding tokens numbered from one to six. Two of the tokens have stars on them which denote that they are action cards.

Each side of the card depicts different powers that the spymaster can use to outwit the other players at the table. Powers include switching tokens from one agent card to another, switching the position of an agent card or even moving a token from the top of the pile to the bottom (where the point value is reduced by one).

This is repeated until one token is left in each player’s hand (two players place down all of the tokens). The tokens are then flipped over and the values of each players tokens are totaled. The spymaster who has the highest value tokens against the card gains that particular agent.

That’s the game in a nutshell, quick and easy to learn and play.

The main strategy of Sub Rosa: Spies for Hire is the interaction between players and trying to figure out what tokens have been placed. Each player will know when the action tokens have been used as they would have be placed up. This is when the power on the cards can be activated and your master plan to win the spies can be put into action.

As a player, do you concentrate on a few agents or do you spread yourself thin and hope that by using the card powers, you can manipulate the cards and/or tokens.

With two players, this game plays quickly and in a ten minute period, several games can be played. The only issue we had with two players (although it may be our play style) is that there wasn’t that much interaction as we were just concentrating on putting down the tokens and activating the powers to gain the spy. However, when I played with a different group and therefore a different group dynamic, there was to and fro in the talk as we all tried to figure out what tokens had just been played. Like many bluffing games aka Coup, Resistance, etc, the more you play with the same group, the more you start to ‘play’ the player instead of just placing down tokens and gaining the agent.

For me, I like games with a theme and this does have a nice theme attached to it. You can imagine that you are M, Treadstone or Malory Archer in charge trying to get the agent for your team. However, due to my desire to be immersed in theme, I could not relate to the agent on the table, why would I choose this agent over another? Imagine if the agents were different spies with different attributes or skills, then I could imagine going for Jason Bourne over James Bond. This is my only minor nitpick for a micro-game of this nature and it is only due to the type of players that we are.

This game is easy to learn and play. I know this as I introduced this to my gaming group who are newbie boardgamers. They enjoyed the game and we played the game numerous times to get them warmed up to heavier games.

So if this sounds like a game that you wish to have in your collection, then click on the kickstarter link and pledge.