Welcome to the first post of many where I look at the gaming world at large and pick out what has caught my attention this week. As someone that is new to the hobby, I may not be up on the latest and greatest but hopefully the news that I showcase will interest you.

So what have the choir of angels been up to lately (That’s the name I’ll give the rest of the family).

Malachi has been busy playing Plants versus Zombies: Garden Warfare on the PC. Despite his objections, he has been steadily getting better at it. He wants to get the second installment of the game so he’s been saving up his pocket money.

He’s also getting into the presenting game and like myself, he can only get better as he does more reviews and how-to videos. He’s going to be concentrating on the kid focused games. You can see his face light up once he gets going. He also loves the feedback on how to get better and how he has done. His latest how-to and review was Robot Turtles by ThinkFun. A game that teaches the basis of programming for young children.

My wife and I have been playing through Pandemic Legacy and we are enjoying it so far. She’s itching to keep on playing and I’m having the urge to savour each month. We’re currently on March right now and it’s exciting to see what might come up. We’re filming each play-through which I will edit and place on YouTube. Based on that video, I’m going to see if I can do trailers for each game that I review or do a play-through for.

There are a couple of games that I plan to more videos of. Namely these: 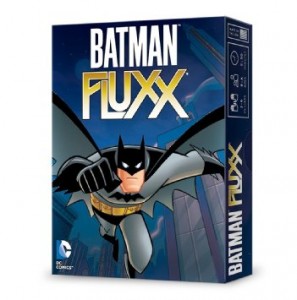 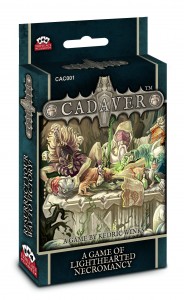 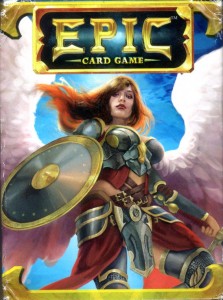 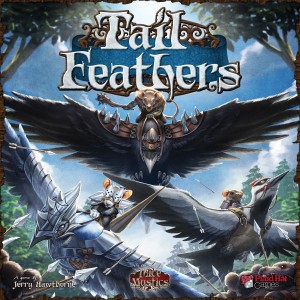 FFG Release a preview of the Punisher One

Since starting my new job, I have found a kindred spirit. Not only do the team have a monthly board game lunch, one of my colleagues is an avid Star Wars fan. So when I showed him the local store that stocked the X-Wing Miniatures, he started to grow his collection. Right now, he’s eagerly awaiting the launch of Wave 8.
I’m still trying to get the hang of tactically flying my Tie fighters and the Phantom. However, we are looking forward to two news ships that are coming out of the Wave 8 Expansions. Namely the Mist Hunter and Punisher One.
What makes Mist Hunter interesting is that not only does it have an illicit cloak, it has a tractor beam. From the look of it, it seems that if the Mist Hunter has a lock, they can move you a range of one to the left or right. This is pretty bad if you are in the middle of an asteroid field or near the edge of the battlefield.

I’m not one for KickStarter games, mainly because there are so many that it is hard to see which games are good and which are well, not very good. However, I will outline the ones that have caught my eye this week. 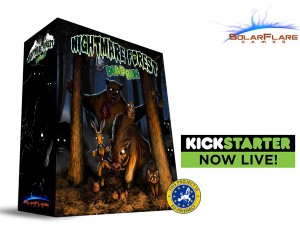 Nightmare Forest is a Kickstarter project by SolarFlare Games where campers are trying to escape a forest that is overrun by Zombie creatures. There is no second or third place, it’s all or nothing. No love lost for your friends or family. You have to get out at all costs.
Their pledge goal was $7,900 and they have met this goal and are currently standing at $9,896 with 17 days to go. My projection was around the $20K mark. Let’s see if I’m right.

Toast! has been sold to Horrible Games

I was listening to Player2Cast podcast where they talking about Tim Page’s latest Kickstarter project, called Toast!.

Toast! is a quick and casual social deduction game designed for the start or end of an evening’s board gaming, or as an after dinner game. It features elegant and tactile components – goblets, napkins and glass pebbles representing wine and poison – to set the scene for a very civilised party game of deception and death!

It reached £13,137 out of a pledge goal of £28,400 before it was cancelled. The fact that it has been picked up shows the confidence that this game will do well. 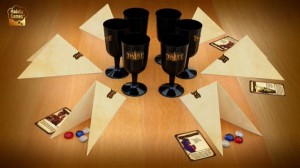 Ember is another project that caught my eye from District 31

Midnight at the Arcane Academy, yet the apprentice wizards are not in their beds; they have slipped away to a campfire in the woods, far away from prying eyes. There, huddled around the flames, the young wizards play a game. Someone has stolen a mote of elemental true flame from the Artificer’s Vault, which the wizards will cast into the moon-drenched sky and enchant with their magic. Whoever transforms the mote into the most powerful mythical creature is the winner. This is Ember.

Why did I back it? I backed this one on the strength of the review done by Player2Cast and I was impressed with the artwork that I saw on their kickstarter page. At this point in time, the are currently at a level of £3,212 out of a £4,000 goal. I backed the £12 ‘Collect at UK Games Expo’ level which gives you:

*COLLECTION ONLY* EMBER CORE GAME 2016 UK Games Expo. Get 52 wizard cards, 6 archmage cards, and at *least* 30 mythical creature cards + all stretch goals. Collection in person from our stand at the UK Games Expo. Who knows what else you’ll get on the day..

So go to the kickstarter project page and/or like them on their Facebook to unlock more Stretch goals.