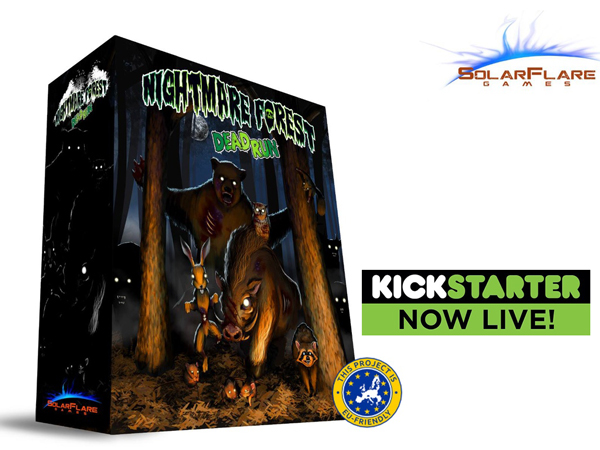 “Inevitably they find their way into the forest. It is there that they lose and find themselves. It is there that they gain a sense of what is to be done. The forest is always large, immense, great and mysterious. No one ever gains power over the forest, but the forest posses the power to change lives and alter destinies.”
― Jack Zipes, The Brothers Grimm: From Enchanted Forests to the Modern World

It’s always good to get a fresh look when it comes to the genre of zombies, from games such as Zombie Dice to the well known Zombicide. Today, a new card game is launched on Kickstarter. That game is Nightmare Forest, a card game that relies on you pushing your luck to survive. Will you be the one to make it out of the forest alive (*cue evil laugh*)

Check out the Kickstarter link – You won’t regret it. The campaign runs from Jan 28 – Feb 29

There is even a theme song to go with the game. It’s good and I’ve listened to it numerous times. Back it, back it now. 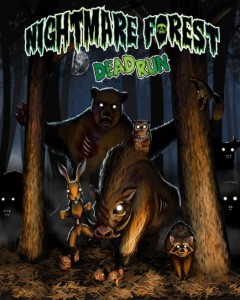 Dave Killingsworth of SolarFlare Games is returning to Kickstarter to seek funding for his new game, Nightmare Forest: Dead Run. SolarFlare has created a light-hearted and unique take on the zombie genre but don’t mistake that light heartedness for being easy on you. Careless risks will punish you but risks must be taken in order to be first out of the woods and win the game.

After more than 200 different people have played Nightmare Forest, everyone from heavy gamers to casual or even non-gamers has enjoyed this quick wind-up/wind-down game that still has some serious bite. The premise is delivered in a safe and campy (pun intended) way, making it perfect to play with kids, providing some thrills while also teaching them lite decision making skills and the risks necessary in order to succeed.

It provides an entertaining and very thematic experience with some dice chucking and push your luck challenges that should produce some laugh out loud moments around the table.

Nightmare Forest: Dead Run is a card and dice take on side-scroller games like Rygar, Mario Bros. or Pitfall. You are camping in a forest with your friends as a critter-filled

zombie infestation strikes in the darkness.

Blinded and frantic, you blaze your own trail. Will you be the lone survivor to get back to the car and make it out alive?

As the monsters grow ever-tougher, your decisions on when to push forward, when to utilize the little gear you can get your hands on, and when to use others as critter-

bait will be the difference between success or being devoured in the Nightmare Forest.