I been to the UK Games Expo for the last three years, but this year, I’m not going due to new job, new house and new baby. God forbid me trying to ferry three children around the expo – nope, nope, nope.

So this post is all about what would have caught my attention if I had gone as a customer and/or being part of the media. If I’ve mentioned it here, then something about the theme, artwork or description has made me turn my head and make an audible excitement noise.

I always set a budget (ok, the wife does) on what games to get. So I’m going to highlight what I would come home with. 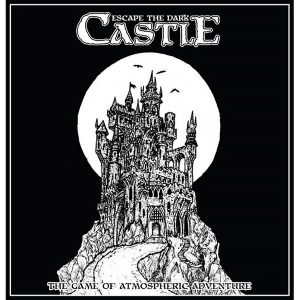 Escape the Dark Castle – I saw this game last year at the UK Games Expo and the booth was packed. To the point where I didn’t have a chance to back the game there or try it out.

The more I look at it, the more that I want to pledge for the new expansion. It reminds me of the artwork that were present in the Fighting Fantasy books back in the 90s.

Why not try Escape the Dark Castle for yourself this UK Game Expo in hall 1, booth E-20, where signed copies will also be available to purchase.

Verdict: If I was at the expo, I would either get the base game or pledge for the upcoming Kickstarter.

Next on the list is ‘Holding on: The Troubled Life of Billy Keer‘ 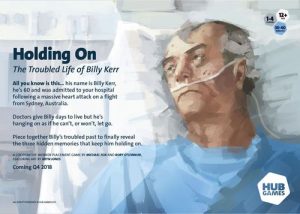 This is a very intriguing game that has been designed by designers, Michael Fox & Rory O’ Connor, with the artwork done by artist: Bryn Jones and published by Hub Games.

They will be at the UKGE showing a demo of the game.

I’m going to have to quote the description, because this game looks so different from the others out there, it just sounds so cool. The artwork is interesting and the premise really sticks in your mind.

Holding On: The Troubled Life of Billy Kerr is a co-operative game where players work as nursing staff tasked with providing care for the terminally ill. Your latest patient has been rushed in following a massive heart attack on a flight from Sydney to London. When the game begins, all you know is this – his name is Billy Kerr, he is sixty years old, and he has been given days to live.

Players must work together to provide Billy with appropriate care, responding to medical emergencies while gaining his trust. Over ten fully replayable Scenarios, you will need to piece together a lifetime of memories while being drawn deeper into his troubled past. As you discover more about Billy, can you help him find the courage required to confront the three regrets that keep him holding on?

Verdict: I don’t know much more about this game but I know that if I was there, I would be sitting down to talk with the designers and having a look at the game. They’ll be at Stand 2-E2 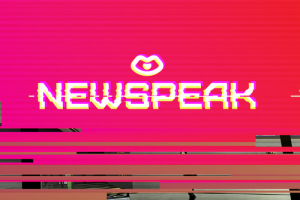 I like Dystopian themes as much as the next person, how badly can we fall into being watched by Big Brother and accept it as part of our lives. So when I saw that In The Box Games were developing Newspeak. I was very interested.

In the not-too-distant future, Britain is a high-tech paradise. Its citizens live and work in an augmented reality that makes the real world seem dull. Crime has virtually vanished, thanks largely to the security app ‘ModNet’.  Employing thousands of casual workers to analyse and identify possible undesirables using a vast network of data, Modnet sells this information on to corporations big and small. ‘Moderated’ citizens find themselves barred from shops and workplaces, never knowing who blacklisted them or why.

A small group of Dissidents seeks to challenge ModNet’s hold on society and disrupt the tech corporations that use it. Attempting to evade the Moderators’ notice, they swap coded messages online, planning to hack communications hubs at various locations to disable ModNet’s grotesque distortion of reality.

ITB Games will be demoing this game at Stand 1-D22

Verdict: If you can get close to the ITB booth (it’s always packed), then I would sit down and try out the demo. The only thing that stops this being an insta buy, is that it starts at 3 players which at home would be a problem as our 3rd player is 9 years old so the theme might be a bit above him. 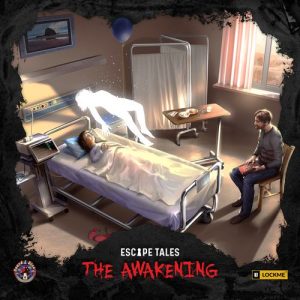 Escape Tales: The Awakening is a card game based on the escape room concept, but you’re not limited by time when it comes to finishing this adventure as the game is focused on the story and your exploration of it, while engaging the puzzles within and making choices that will immerse you deeply. As for the story,

Players take on the role of Sam, whose daughter has been in a coma for over two months and whose doctors still cannot explain how this happened or what caused it. According to them, everything is fine with the girl; she’s healthy and shouldn’t be in this condition. Sam is desperate and looks for answers everywhere he can, which leads to a weird meeting with Mark.

Mark’s son was once in a similar situation, and his father was able to help wake the boy up. He has given Sam a scary-looking book and said that inside this book he will find a ritual called “The Awakening”. But Mark warned Sam that he needs to prepare himself mentally since this ritual will transfer him into another dimension, where he should be able to find his daughter and understand what is the cause of this state. If Sam’s lucky enough, then he will be able to wake her up as well. Sam has held onto the book for more than a week. Finally, he’s ready to go into the basement and perform a ritual. Are you ready, too?

With an description like that, it’s hard to not feel drawn to the game that has been designed by Jakub Caban, Matt Dembek, Bartosz Idzikowski and published by Board and Dice. If you visit Stand 1-K2, then they will have a demo for you to play.

Verdict: Worth a stop by the stand to explore this escape game. 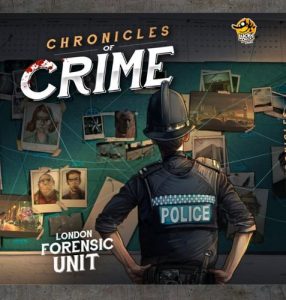 This is an interesting premise – A game that incorporates virtual reality. It’s not a new concept but I’ve never experienced it and the theme of solving crimes is very interesting.

Chronicles of Crime is cooperative game of crime investigation, mixing VR experience and board gaming.

With the same physical components (board, locations, characters and items), players will be able to play plenty of different scenarios and solve as many different crime stories.

Verdict: This is another demo that you can try out by visiting the Lucky Duck Games at Stand1-H26.

Throw in a dash of Demolition Derby, Burnout with a big splosh of Mad Max and I imagine you will get a game such as ‘Wreck and Ruin’. A game designed and published

by Mark McKinnon. I did see this at previous UK Games Expo and the booth was packed with people trying out the game.

Wreck and Ruin is a vehicle miniature board game, set in the not-too distant future of a post-apocalyptic world. 2-4 players can choose between 4 factions and make up their convoy from the 4 classes of vehicles available. scouts are fast and can shoot on the move but are weak, buggies can repair other vehicles. wreckers are powerful vehicles designed to crush their opponents. big rigs are slow but have strong attacks and can soak up damage and still keep going too!

Verdict: If I was going again, I would definitely look at purchasing this as I know that my son and I would love to bash each others cars (I would probably lose). So visit Stand 1-K22.

I think this post is long enough and hey, I tend to go for the whole three days, so I’m going to be on the social media living through other people. I have other games that I would be interested in which I will explain in my next set of posts.